Trust under an interorganizational prism 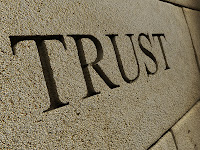 Companies become globalized and driven by diverse and multi-cultural employees. This leads to the realization that hierarchical structures cannot be as effective but there is a shift to more collaborative frameworks. A collaborative framework can be perceived in many levels but for the scope of this analysis we will take into consideration collaboration within the organization, on an interorganizational level and within a network.

Parkhe (1998) has made some highly interesting observation regarding the concept of trust; trust as a concept involves uncertainty by nature. Trust implies vulnerability i.e. the risk of losing something valuable. The extent of value and the extent of this potential loss are normally perceived under an ad hoc perspective. Trust is directly proportional to behavioural functions meaning that it is placed upon a person whose behaviour cannot be controlled from the outside. This means that trust is put on something which cannot be directly controlled but potentially partly influenced. Last but not least trust is “a fragile entity based on a set of socially learned and socially confirmed expectations that people have of each other” (Lauring and Selmer, 2010, p.269).

Trust is a firm’s choice within an interorganizational relationship. At the same time understanding the institutional, cultural and societal norms can lead to a smoother facilitation of the role trust, the extent of openness and performance. Firms need to invest on trust since it is something that is not taken for granted especially in a cross-cultural perspective. This puts the emphasis on the need to rebuild trust. Trust investment can be affected by the national context per se since lack of trust emerges the need of other mechanisms such as monitoring or control systems leading the additional efforts and cost and resulting in a relationship that is developed via surveillance and not mutual understanding and confidence. This means that within an international collaboration trust asymmetries may arise which stem from the different expectations, the extent of openness and interaction and the differences in the institutional and cultural environments in which is partner is embedded.

Posted by Dimitrios Salampasis at 03:22